This year, we introduced a new country to our Global Business Week options: Cuba. While the theme was Cuba’s next chapter, much of the trip focused on health care and tourism.

We recently talked to West Coast student Dr. Shika Pappoe, WG’16, a health care professional in Los Angeles, and East Coast student Robert Specht, WG’16, a portfolio manager at SEI Investments in Philadelphia, about their experience in Cuba. Here is what they said:

Shika: The fact that diplomatic relations are starting to open up made this a fascinating time to visit. The country will change dramatically and I wanted to see Cuba while it was still frozen in time. Also, I wanted to see the hope and anticipation among the people for what is to come.

And as a physician, I had read that Cuba has an amazing health care system with access to primary care for everyone and the deployment of physician teams to disaster zones around the world. I was curious to learn more about this system and see how it works despite the country’s limited resources.

Rob: This opportunity to see a socialist country – and a culture that is still untouched by the U.S. – was very unique. It pushed the boundaries of my travel experiences.

We visited a large hospital in Havana and saw its cardiac care unit, a community primary care center, and a health care facility that is focused only on medical tourism. Another day, we learned about the tourism industry and visited an all-inclusive hotel that is managed by the Spanish company Barcelo Group, but owned by the Cuban government. And we visited a privately-owned spa with a unique business model.

Rob: We also learned about the country when we went off the beaten path. We felt comfortable walking around Havana and talking to the locals. It helped that many of my classmates are fluent in Spanish.

We got tickets to a Havana Industriales baseball game and visited open-air markets.

Before we left, I took a group of classmates to a bar in Havana where my great-grandparents had taken a photo with friends in the 1930s. When we got to that bar, we re-created the photo. It was awesome!

Rob: There is a striking juxtaposition of wealth and poverty. We stayed in a very nice hotel, but a block down the street there were collapsing buildings. I also observed a lot of government propaganda. That was eye opening.

Shika: The country and the people are beautiful. While we saw poverty and how the country is lacking in resources, we also saw how they are working to improve things. There is a sense that the leaders are trying to engage with the people about the direction they want to go. The local people seem very excited and friendly toward the U.S., which contrasted with a few art exhibits that were critical of former U.S. leaders.

Shika: I was impressed by the degree to which everyone has access to health care and the amount of focus on community outreach. All physicians practice in their own communities so they really get to know their patients.

For example, they see patients in the grocery store and can ask them how they are doing and if they are taking their prescription medication. That intersection between the health care system and the community is one that we can learn from in the U.S.

Shika: The visit to the all-inclusive resort in the beach town of Varadero stands out because the beach was just stunning. I’ve been to many Caribbean islands and that beach is now at the top of my list of beautiful places.

During our talk, we learned about the Spanish management group’s joint venture with the Cuban government. There was a lot of skepticism among students about how Cuba interacts with foreign countries when it comes to running businesses, but the Spanish representatives showed a lot of optimism. They talked about future projects and growth.

I also found the visits to the health care centers eye opening.  At the cardiac care unit, a classmate asked the director what he would do if he was given a million dollars. His answer wasn’t focused on the needs of his own hospital, but rather the needs of all of the hospitals and health care centers. He talked about how after assessing those needs, he would allocate the money so everyone could work the most effectively. Throughout the trip, we saw time and again how our Western views about money and the allocation of funds differ.

Rob: There were only about 30 students on this trip so we got to know each other pretty well. By the end of the week, it felt like we were all one class. My LinkedIn connections skyrocketed during the week – even beyond the students on the trip. That was in part due to a West Coast student with a similar professional background introducing me to other San Francisco classmates in that field.

Since I’ve been back, I’ve been talking to Wharton San Francisco students who weren’t even on the Cuba trip. Having the West and East Coast classes mix on the trip added a lot to the experience. We’ve already started to plan an East-West golf trip in Arizona after graduation.

Shika: That fact that we could share in this first trip to Cuba was great. The smaller size of our group meant we could really get to know each other. I deepened existing friendships and made new friends. Perhaps the biggest source of bonding was the lack of access to the Internet. We were always talking and connecting with each other instead of being distracted by our phones. 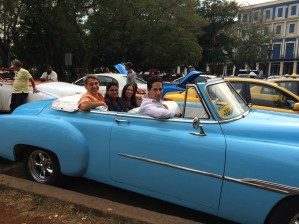 Shika: It was very valuable to take the lessons we learned in our first-year core courses and apply them in this very different setting. We also were pushed to think more critically about our approaches to entrepreneurship and business development. And just being able to take a step back and look at things in the context of history was helpful. Cuba makes you stop and look at the past while you consider the future.

Rob: This pushed my comfort zone in terms of travel, but it was an amazing experience that I couldn’t have had without Wharton.