Angela Specht, WG’20, chief of staff at Johnson & Johnson Global Public Health, came to Wharton for the credential of an MBA, but says she is getting “exponentially more” out of this program.

Angela Specht, WG’20, started her finance career working in audit and compliance before a Wharton EMBA alumna, Wendy Rose, WG’94, told her about a position at Johnson & Johnson. “She said, ‘I think this is where you belong,’ and passed my resume along. A month later, I had a job there. That was my first experience with the Wharton spirit of helping out,” Angela said.

She joined J&J in a finance role, focusing first on the consumer sector and then the pharmaceutical space, where she supported R&D and global commercial strategy. During that time, she connected with a mentor at J&J, Steve Bariahtaris, WG’94, who graduated from Wharton’s EMBA program with Wendy.

After working more than a decade in finance, Angela transitioned into global public health, where she is now chief of staff, supporting impactful projects like the launch of a vaccine to prevent the spread of Ebola in Africa.

While she felt qualified for her new role because of her experience, Angela wanted the credential of an MBA. She explained, “I have the knowledge and experience, but my resume didn’t reflect that because I only had an undergraduate accounting degree. I wanted to be seen on equal footing externally with other people in similar leadership roles.”

Turning to her “personal board of advisors,” which includes her husband Robert Specht, WG’16, Steve, Wendy, and other friends and colleagues in her support system, she asked for advice. “They all encouraged me to consider Wharton’s EMBA program,” she said.

Taking this idea to her manager, they came up with a plan: Angela would study for and take the GMAT. If she achieved a high enough score, then her manager would support her application to Wharton. “I studied for four weeks and then exceeded my score goal. After that, my manager advocated for me to come here with full sponsorship,” she said.

Coming to Wharton was the right decision for Angela. “I thought it would provide a credential for me as a business leader, but it’s actually making me a business leader. This program isn’t just about getting a credential. It’s a transformational experience and I’m getting exponentially more out of this program than I expected.”

She points to a few unexpected benefits as examples:

Confidence – “I know that I can go anywhere in my organization and lead because I now have a leadership toolkit. I’ve always been passionate about leading people and having a vision for the organization, but now there is more substance to that, and I feel more confident.”

Knowledge – “I have applied something from every class right away to my job. When I took Prof. Stewart Friedman’s Total Leadership class, we were assigned to write a leadership vision. I took my vision to my manager to discuss my career goals. I never would have done that without this class. And a class on decision-making changed how I interact with my leadership team and how I ask questions to make decisions. I shared class material with my leadership team because it was that impactful.”

Support – “The first year is stressful because you’re not used to being in school and you have a lot to juggle. But my learning team provided a critical support system. They gave me a place to feel safe and let my guard down. Classes became a team effort. I had seen this with my husband’s learning team, which still keeps in touch. And I was glad that my learning team is similarly bonded.”

Bandwidth – “I never could have imagined how much I could accomplish in a day. Taking on this program — in addition to a demanding job, where I’m travelling a couple weeks out of the month while raising two kids and then coming to campus for course work — is like fire that forges steel. I’ve been in that fire and I feel ready to take on even more responsibility.”

Friends – “As a working mom, it’s hard to find the time to keep up with friends, much less make new friends. This program gives you a built-in group of friends in similar positions. I have a social life again and that is amazing.”

Family – “My kids think it’s cool that I’m in school. We use Wharton to show them that learning never stops. They love to visit me on campus, especially when they get to spend the night at the hotel!”

While it wasn’t unexpected, she noted that another big benefit is the rigor of the curriculum. “This is not a watered-down MBA. This program stretches you and makes you prioritize. This is what forges leaders. The rigor – and how it prepares you to lead – is the biggest value of this program.” 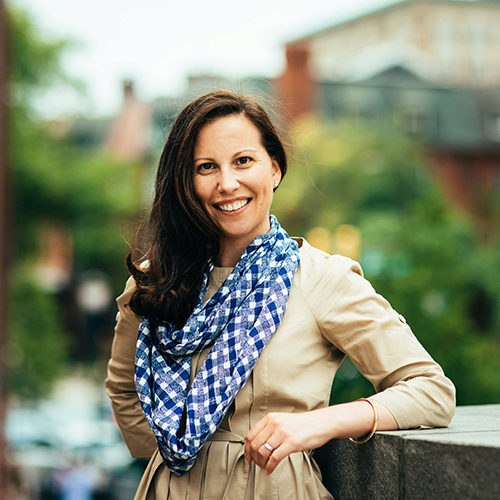