At Wharton, it’s about the global perspective and understanding that you are part of a larger global community.

We asked the managing director of cost transformation at Kaiser Foundation Health Plan and Hospitals to tell us more about her experience on the trip. Here’s what she said:

We were given four options for our required International Trip, but as soon as I saw South Africa on the list, I knew that was where I wanted to go. As a destination, South Africa has always been a country on my bucket list. I also looked forward to diving into the theme: Opportunities and Challenges in an Emerging Market, and the opportunity to apply these learnings across multiple industries. While I currently work in the health care field, I previously spent several years consulting with companies in the mining and consumer business/manufacturing space. The South Africa course promised a deeper look into these industries as well as many others.

The trip began in Johannesburg with a panel of experts providing an overview of the economy and the challenges facing post-Apartheid South Africa. It was clear that the country is burdened with several big issues, such as a 25 percent unemployment rate, corruption, equal access to education for blacks, and access to affordable health care. I was particularly interested in learning more about South Africa’s health care issues and strategies, considering the country has one of the highest HIV infection rates in the world.

Our trip was extremely well organized, as we had three professors on the ground: Wharton Prof. Martine Haas, Johan Burger, a professor from a local university, and Vice Dean of Wharton’s MBA for Executives Program Peggy Bishop Lane. Each day was strategically focused on a different set of industries including banking, manufacturing, mining/energy, health care, media, entrepreneurship and wine. During those days, students could select from various company visits that were of greatest interest to them.

One of my most memorable and inspirational visits took place on our entrepreneurship day, where I opted to visit Khayelitsha, a well-known Township outside of Cape Town. During Apartheid, Townships were established as underdeveloped living areas reserved for non-whites.

Although Apartheid was abolished in 1994, a large majority of South African blacks continue to reside in these areas, which include homes ranging from tin shacks to upper middle class two-story residences. Infrastructure in these areas remains poor and unemployment in Khayelitsha is almost double that of the national average at a rate of 47 percent.

Our visit to Khayelitsha introduced us to a phenomenal set of determined, young entrepreneurs at Hubspace, an entrepreneurial incubator. Despite the socioeconomic environment, they have leveraged innovation and grit to launch businesses that have grabbed international attention.

We learned how one gentleman launched a logistics business that offers delivery of chronic medication from public hospitals to clients’ homes (which has greatly improved the current process of spending an entire day at a hospital for medicine), how another introduced lattes and cappuccinos to the town through the Department of Coffee (a trendy coffee shop that gives a portion of its proceeds back to food programs in local schools) and how another launched a green baking business on U.S. $4 in start-up capital.

The panel discussion was a two-way dialogue as the young entrepreneurs wanted to get to know and learn from us as much as we wanted to get to know them. Afterward, the entire class stopped by the Department of Coffee for some very tasty espresso drinks served up by the best baristas in Khayelitsha!

How Technology Is Disrupting Traditional Banking

Another fascinating visit was to Vodacom, where we learned how telecom companies in Africa are leveraging mobile technologies to disrupt the traditional banking sector. Due to the lack of infrastructure that remains throughout rural areas and Townships across South Africa, mobile technology has provided a level of access that did not previously exist.

By tailoring the use of these technologies to local needs, telecom companies are providing people who have never before had a personal bank account with the ability to suddenly participate in the economy in new ways. Through these technologies, users can make payments and easily send money to distant relatives. Vodacom anticipates a growth curve reaching 10 million customers over the next five years. This growth has the ability to significantly impact South Africa’s struggling economy.

Ironically, while we were on the trip, Apple launched Apple Pay, a new mobile banking technology with features similar to those already in existence in Africa. Due to the fact that western societies already have a functioning banking system in place, adoption of this new technology will likely be slow compared to the curve in African countries. This concept of “leapfrogging” (i.e. the opportunity for Africa to leapfrog developed economies by adopting the latest technologies and adapting them to the needs of local people and organizations) is one that became a consistent theme throughout our trip.

Finally, a visit with the marketing and strategy leaders at Mediclinic South Africa, a subsidiary of Mediclinic International (the sixth largest private hospital group in the world), was also very enlightening. My current role at Kaiser Permanente focuses on driving the transformation necessary to make high-quality health care more affordable for our members and patients.

Through this visit, I learned that the South African health care industry is faced with many of the same challenges we have here in the U.S., especially the rising cost curve. They too are focused on reducing cost structures and increasing access to the broader population. Through this visit I was able to broaden my health care network beyond the walls of the U.S. and establish an opportunity to share best practices across nations.

As for bonding with my classmates, the trip was a terrific opportunity. I went to Africa four days early to join 25 of my San Francisco classmates at an amazing safari resort.

And when the official part of the trip began, I met and built relationships with many of our East Coast EMBA peers. It turned out that we had several foodies in our combined group who took the lead in organizing group dinners at a few of South Africa’s most fabulous restaurants.

They also ensured that we mixed up our classes during those dinners so we had opportunities to connect beyond our comfort zones. Those relationships have carried over since the trip, especially since we have 15 East Coast classmates now taking electives in San Francisco and several West Coast students in Philadelphia this term. The trip was an excellent platform to build those friendships.

This was one of the best experiences at Wharton so far, and timing was a big part of it. We’d all just completed our core coursework, which provided an overview of all aspects of business, including areas not in our direct fields. By the time we arrived in South Africa, I was able to appreciate the country — and the experience — through a diverse set of lenses far beyond the limitations of the finance lens I brought with me to Wharton.

At Wharton, it’s about the global perspective and understanding that you are part of a larger global community. The connectivity of our East and West Coast classes with the rest of the world is a good way to experience the global brand of Wharton and the global experience of Wharton’s EMBA program. 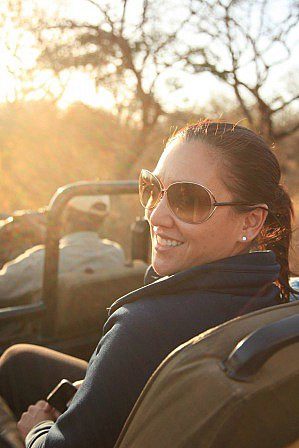