“Being surrounded by people who feel very comfortable in the multitudes of their identities, that’s made me feel very connected to those aspects of myself.”

Dimia Fogam, WG’17, didn’t plan on heading up Wharton’s African American MBA Association (AAMBAA). She had already committed to serve as co-chair of the Wharton Africa Business Forum — and organizing the logistics and programming for more than 600 attendees would likely dominate the first half of her second year.

But Dimia couldn’t turn down the opportunity to lead the organization that made her feel at home as a first-year MBA student. “It’s a very different experience to be at the helm of that. It’s much more personal,” she said. “It’s a community that provided a ton of support for me and a home base that gave me a lot of courage and strength to succeed in other aspects of campus life.”

Founded in 1973, AAMBAA was originally known as the Black MBA Association before changing its name in 1986. The group’s mission is to support all students of African descent in Wharton’s MBA program, emphasizing academic achievement, community involvement, and career success.

“People primarily identify me as African American, especially because I’m the president of AAMBAA, but I’m actually not technically African American, I’m Cameroonian and Russian,” said Dimia, who was born in Russia and grew up in Cameroon and Canada before coming to the States 15 years ago.

“I’ve always felt like a little bit of an outlier wherever I went, and I feel like the duality of my identity has always been something that was difficult to find in other people,” she said. “AAMBAA is basically like a big family. It was this space where I was 100 percent comfortable and accepted, and where I could just be totally present and totally myself.”

With classmates from more than 70 countries around the globe, Dimia soon connected with many other students who had backgrounds similar to hers.

As President of AAMBAA, Dimia had the opportunity to expand and strengthen the support network that had supported her. She took on the role in August 2016 — as protests over racial divides in America erupted across the nation in the wake of several fatal police shootings of black citizens.

Following the release of the video of Terence Crutcher being shot in Tulsa, Okla., Dimia met with the leaders of AAMBAA, the student-led Return on Equality (ROE) coalition, and allies from other groups on campus to discuss what they could do to engage the school-wide community in an open dialogue.

“Wharton is a really student-run place, and the conversations that happen are determined by the students who want to have them,” she said.

They decided to wear all black to campus as a sign of mourning and solidarity and a willingness to engage in difficult conversations about race and policing. The decision was made around 10:30 p.m. and the 10 people in the room spread the word through Facebook, GroupMe, and text message.

More than 300 of their classmates wore black the next day, joined by some professors and administrators who heard through word of mouth. Students, faculty, and staff at business schools across the country followed their lead.

“It made me feel much closer to Wharton,” Dimia said. “The circumstances are unfortunate, but I think the Wharton community was very open, very willing, very interested in learning and pushing itself, and so that was a really positive experience.”

AAMBAA worked with ROE to organize a Wharton-wide discussion to continue the conversation about race and policing in the U.S. Students, faculty, and staff filled the auditorium in Huntsman Hall for “Why Wharton Wore Black,” an open forum where they could dig deeper into the issues, share personal stories, ask difficult questions, and engage in open dialogue.

“I think ROE is one of the most impressive things that Wharton has going for it from a student organization perspective. It’s incredibly forward thinking,” Dimia said. “There was a desire to have this conversation among all kinds of different people and it’s great that AAMBAA was able to be part of that.”

“I think any business school today that isn’t paying a huge amount of attention to issues of inclusion and equality is not preparing its students for the world that they’re going to be working in.” 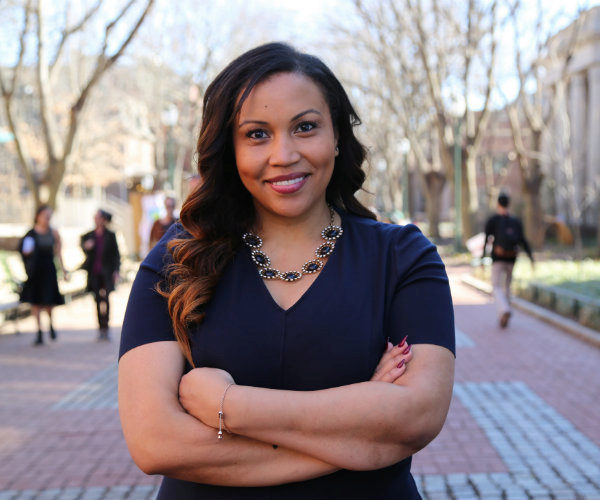