Wharton Stories » Prof. Nancy Rothbard on the Interactions of Work and Life and Her New Role as Management Chair

Prof. Nancy Rothbard on the Interactions of Work and Life and Her New Role as Management Chair

“As an academic, you’re an entrepreneur of ideas. I’m constantly developing new ideas, putting them out there, and seeing how the market reacts. Do I get people interested? Do I affect people’s lives?”

When Prof. Nancy Rothbard was growing up in suburban Philadelphia, she sometimes worked with her father and uncle in their office furniture and supply company. Those interactions within the family business showed her that life happens at work too — it’s not just what happens at home.

“Work is a huge part of people’s lives,” said Rothbard, who is the David Pottruck Professor in Wharton’s Management Department. “It’s where they live their lives in part. It’s what I wanted to study.”

It was the beginning of the question that has driven her research throughout her career — the intersection between life and work and the interplay between co-workers. Observation of those interactions was a factor in her thinking when she and her colleague Prof. Sigal Barsade dramatically redesigned the MBA core leadership and teamwork course. And now she’s experiencing another intersection between research and practice as the new Management Department chair.

“When I was in high school my mom went back to get her doctorate, so I had some exposure to the academic life,” said Rothbard.

Her mother, Aileen Rothbard, now a research professor at Penn’s School of Social Policy and Practice, showed her that academics were an alternative to the business path she assumed she’d follow. For her undergraduate studies, the younger Rothbard chose Brown University, which did not have a business program.

“I took the only two business classes they had out of the engineering program, and I was torn,” she said. “Did I want to go into business? Did I want to do research and teaching in academia?”

After graduation from Brown, she had an opportunity to take a closer look at academia and business at the same time. She became a research associate for leadership guru John Kotter at Harvard Business School, collaborating on case studies and two books.

Kotter had been working on a long-term project with the class of 1974, interviewing MBAs before graduation and following them every year. Rothbard came in to help finish the project right before the 20-year mark.

“I ended up interviewing about 50 MBA alumni all over the country,” she said. “I flew all over and interviewed them about their careers and what their experience had been. I was really captivated by that. They had such fascinating experiences and lives. Things they didn’t think would matter did, and things they thought would matter hadn’t mattered as much.”

While the project could have tipped Rothbard toward getting an MBA of her own, she committed in the other direction.

“My choice in that job was to be able to learn enough to decide whether to go into business or academia,” she said.“It cemented my total passion for going into academia and learning more about people, organizational experiences, and how that affects their outcomes at work.”

Rothbard earned her PhD in Organizational Behavior and Human Resource Management at the University of Michigan. After graduating from Michigan in 1998, Rothbard took a post-doctoral fellow position at Northwestern’s Kellogg Graduate School of Management before re-entering the academic job market. Rothbard’s career search was complicated by the fact that she’s part of a dual-academic-career couple. She met Brian Bushee, now a Wharton professor of accounting, in graduate school, and after three years of a long-distance relationship, they wanted to continue their careers in the same city.

With the complications of academic placements and the pursuit of tenure to contend with, that outcome was never assured. And yet they both landed at Wharton in 2000, and both eventually earned tenure while raising their two children together.

Reinventing Leadership and Teamwork at Wharton

After teaching MBAs and undergraduates at Wharton for more than a decade, Rothbard and her Management colleague Sigal Barsade became the driving forces behind the MBA core course, Foundations of Leadership and Teamwork, completely re-designed and launched in 2009.

“I was a case writer for many years, and cases can be a great way to learn,” Rothbard said. “But in Negotiations we gave people exercises, and I could see them learning before my eyes. They were hashing it out. They were seeing and learning from their own mistakes in a safe environment.”

Rothbard and Barsade wanted that kind of interactive learning in their leadership courses. The two decided to look for a simulation that would deliver the same experiential learning in leadership and teamwork. They tested a lot of programs out, but it was “like Goldilocks,” Rothbard said — nothing fit.

When they spoke to the deputy dean about what they were trying to do, he told them, “This has to be created by Wharton.”

Rothbard and Barsade found Forio, an innovative learning company, that worked with them to develop their ideas into the simulation that became Foundations of Leadership and Teamwork, offered as the first core course during MBA Pre-term.

“I can’t reveal the surprises because they’re the secret sauce, but we layered business and leadership challenges in each of the rounds,” Rothbard said. “We were just going to do a simulation at the beginning and then continue the course in a standard format, but there was this power of experience, debrief, experience, debrief. We believed the flow would create an experience that is incredibly memorable.”

“The course is amazing, to watch the students learn in this compressed time frame. They come through this and they’re changed,” she said. “It’s a bonding experience as well, coming at the beginning of Pre-term. MBA students go through this with their learning team and are challenged to work together with people they haven’t worked with. When you’ve done something and either succeeded or failed, it sticks with you. We wanted to get the learning to stick.”

In August 2016 Rothbard began her new role as the chair of the Management Department, where she has her own challenges to handle.

“This is my first year as chair so there is quite a learning curve,” she said. “In the Management Department we have a common language we can use to talk about issues, but I know it could also be more difficult because they could catch me if I’m not walking the talk.”

Rothbard is conscious of her position as the first woman to lead the Management Department in Wharton’s history.

“I don’t think I was chosen because I’m a woman, but symbolically it does matter,” she said. “One of the things that’s important to me is increasing the diversity of the department. I knew it was important to me, but it might not be important to everyone. If I wanted it to happen, I had to be willing to take the role when I was asked to do it.”

Now Rothbard has to balance her leadership role with teaching and research. And her research interests have continued to evolve.

“I still work on work/family issues, but in a different way,” she said. “I’m fascinated by the influence of technology on the way we work and how it’s influencing the way work and family are intersecting.”

She’s looking at social media, friendship at work, and how emotion enters into the workplace.

“It’s all internally consistent for me,” she said. “The focus of my work has always been on people’s ability to engage with work. Because I come from a family business, I had never assumed there was a bright line between work and personal life. I had seen a lot more fuzziness around that boundary.”

Rothbard retains those early business experiences, even as she has pursued the academic path.

“As an academic, you’re an entrepreneur of ideas,” she said. “I’m constantly developing new ideas, putting them out there, and seeing how the market reacts. Do I get people interested? Do I affect people’s lives? Do I affect the lives of the students I work with? I love research and the teaching I do, and I don’t want to give that up.” 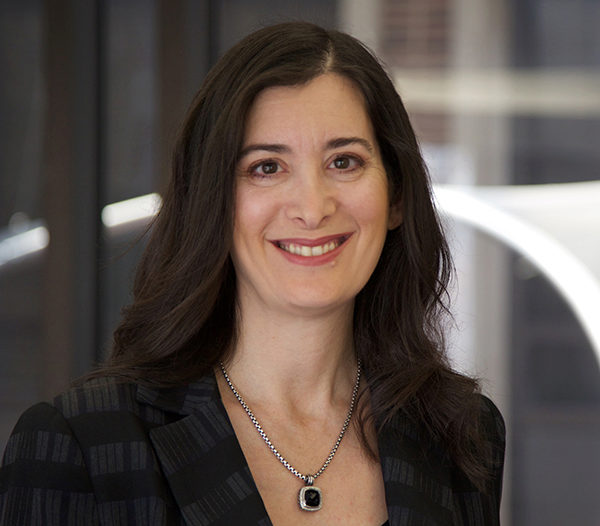 Hiring from Outside the Company: How New People Can Bring Unexpected Problems

Is the Party Over? The Unintended Consequences of Office Social Events

Waking Up on the Wrong Side of the Desk: The Effect of Mood on Work Performance