Wharton Stories » The Key to Becoming a Better Leader? Question Your Assumptions

The Key to Becoming a Better Leader? Question Your Assumptions

Wharton Prof. Adam Grant and Dean Erika James share five ways executives can rethink their assumptions about what it means to be a good business leader.

When Wharton Professor Adam Grant sat down to write his new book, “Think Again: The Power of Knowing What You Don’t Know,” he wanted to make the case for why executives should reconsider their approaches to how to manage people in a modern workplace and embrace new ideas, based on systematic evidence.

Grant is an internationally recognized thought leader in management and workplace dynamics, best-selling author, and the co-director of Wharton People Analytics. In an Ivy Exec webinar called “Inside the Mind of Professor Adam Grant” sponsored by the Wharton MBA for Executives Program, Grant sat down with Wharton Dean Erika James, an organizational psychologist herself. The two discussed the importance of questioning your assumptions of how to engage and communicate in the workplace, in order to become a more evolved leader.

Here are some highlights from their discussion.

1. Resistance to new ideas is a common workplace problem. But embracing data-driven approaches can leave you better prepared for the future.

“I’ve spent most of my life frustrated that I come into workplaces with systematic evidence, and leaders say things like, ‘Well, that’s not the way we’ve always done it,’ or, ‘That will never work here,’” Grant said.

“The big moment for me was winter of 2018. I went to a bunch of Fortune 500 CEOs and unicorn startup founders. I said, ‘Look, we already have good evidence that as long as people are in the office half the week, you can get more productivity, more satisfaction, higher retention, and no cost to collaboration by letting people work from anywhere the other half of the week,” he said. “But I’d love to try something smaller. Let’s just run a remote Friday experiment, give people one day a week to work from wherever they want. Every single leader I pitched turned me down.”

With the start of the Covid-19 pandemic, those same companies have since pivoted to permanent remote work or a hybrid model.

“If (they) had rethought (their) resistance in 2018, (they) could have had all of 2018 and 2019 to figure out how to make remote work work, before we were going through a global pandemic,” he added.

2. Don’t be a “logic bully.” Instead, acknowledge your own shortcomings and ask questions to learn about the other person’s perspective.

Grant spoke about a personality quirk of his, in which he “doubles down and argues harder” when someone resists his point of view.

He said, “I didn’t really realize that that was a mistake until I had a student call me a ‘logic bully.’ I remember I was in the middle of a conversation with a student making a big career decision, and I thought that she was very clearly leaning in one direction, and I was worried that she might have some blind spots, so I gave the most passionate argument I could in the opposite direction.”

“She pushed back, and I pushed back again. Eventually she said, ‘Adam, you’re a logic bully.’… You just keep bombarding me with data and with facts and with reasons, and I don’t agree, but I don’t feel like I can fight back.’”

This tactic isn’t an effective way to communicate because it leaves the other person to defend, to attack, or to withdraw.

“Now I like to come into a disagreement, and as soon as I realize that somebody has a different point of view, I acknowledge my own shortcomings… It invites the other person to commit to openness, too. And then we’re both agreeing to learn something from each other. It completely changes the way that I have debates,” Grant said.

3. Let go of knowledge and opinions that are no longer serving you well.

Grant recalled a time when he had to challenge his assumptions. Before the Covid-19 pandemic, Grant said he had strongly resisted Wharton moving to an online teaching environment, believing that the energy of an in-person classroom would be lost.

“I just resisted every single form of online education we were doing (but) I have completely re-thought that. I had the richest conversations that I’ve ever had in a classroom, teaching over Zoom,” he said. “For the first time in my career, instead of calling on a random hand that’s up – usually from an extroverted white man by default – I could see what perspectives were coming into the conversation, and then I could choreograph a discussion where people built on each other, where they challenged each other, and there was so much depth and so much inclusion of diverse voices because I was able to see what different people were thinking. I want to bring that back into the live classroom.”

4. Success depends on your ability to make other people successful. That’s why investing time into learning effective leadership skills is so important, especially for people interested in earning an executive MBA.

Grant said, “One of the things I hear pretty frequently, especially when I work with executive MBA students, is they’re at a point in their careers where they say, ‘I did an undergraduate business degree and I wish I had paid attention to (building leadership skills) earlier.’ And my goal when somebody finishes a class of mine is that they never have that thought again – that they invest in building the leadership skills that are going to be relevant to amplifying their impact.”

He added, “No matter how high you climb in your career, you cannot succeed alone. In fact, the higher you climb, the more your success depends on the ability to make other people successful. And if you don’t invest with the same discipline and the same analytical rigor in figuring out what effective leadership skills look like as you did in (for example) operations or in finance, then you’re actually limiting your ability to succeed in your career.”

5. Leadership is not a “soft skill.” In fact, it’s one of the hardest things to master.

“It’s been my experience that it’s the hardest thing any leader will do because there’s no equation,” she said. “You can’t plug in some numbers and get an answer. Every circumstance is different and it requires your own level of emotional intelligence, intellect, and interpersonal savviness to be able to get out the best in the people that you’re working with.”

Grant responded by saying that James’ point was a good example of how to rethink an assumption.

“That is brilliant. I have to change now how I talk about this because for years, I have told students, ‘What I am going to do is bring you hard data on soft skills.’ And what you just made me realize is I’m still implicitly endorsing the idea that these skills are soft,” he said. “I think it actually captures in a much more meaningful way, both the importance and the difficulty of practicing the kinds of skills we teach as psychologists… There’s no more hard data for soft skills. The skills are hard.”

About the Wharton MBA Program for Executives

Wharton’s executive MBA program is a top-ranked degree program in which experienced professionals can earn their MBA while continuing to work full time. With class sessions every other weekend on Wharton’s campuses in both Philadelphia and San Francisco, EMBA students apply what they learn immediately to their jobs and earn the full Wharton MBA in a modified schedule over the course of two years. Whether you want to advance in your current industry, shift roles, or build a new business, Wharton’s Executive MBA Program can help you achieve your professional goals.

Learn more about the program 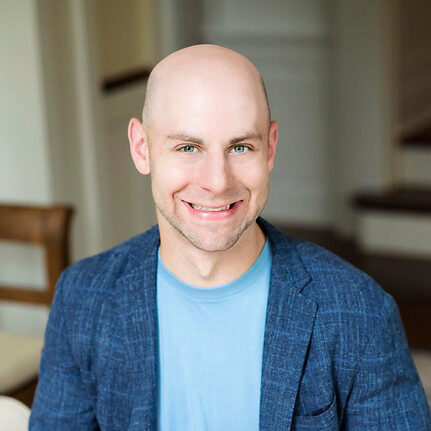 Adam Grant has been Wharton’s top-rated professor for seven straight years. As an organizational psychologist, he is a leading expert on how we can find motivation and meaning, and live more generous and creative lives. He has been recognized as one of the world’s 10 most influential management thinkers and Fortune’s 40 under 40.

​He is the #1 New York Times bestselling author of 5 books that have sold millions of copies and been translated into 35 languages: Give and Take, Originals, Option B, and Power Moves. His books have been named among the year’s best by Amazon, Apple, the Financial Times, and the Wall Street Journal and praised by J.J. Abrams, Richard Branson, Bill and Melinda Gates, Malcolm Gladwell, Daniel Kahneman, and Malala Yousafzai. His new book, Think Again: The Power of Knowing What You Don’t Know, was released in February 2021 and is a #1 New York Times bestseller.

Adam is the host of WorkLife, a chart-topping TED original podcast. His TED talks on original thinkers and givers and takers have been viewed more than 25 million times. He received a standing ovation at TED in 2016 and was voted the audience’s favorite speaker at The Nantucket Project. His speaking and consulting clients include Google, the NBA, Bridgewater, and the Gates Foundation. He writes on work and psychology for the New York Times, serves on the Defense Innovation Board at the Pentagon, and has been honored as a Young Global Leader by the World Economic Forum. He has more than 3 million followers on social media and features new insights in his free monthly newsletter, GRANTED. 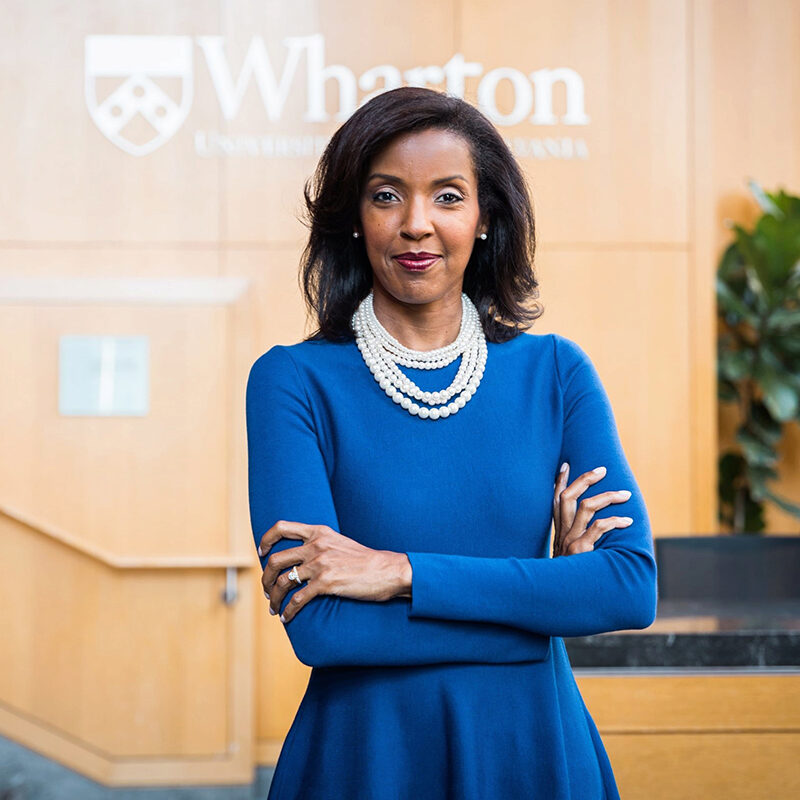 Erika H. James became the dean of the Wharton School on July 1, 2020. Trained as an organizational psychologist, Dean James is a leading expert on crisis leadership, workplace diversity and management strategy. Prior to her appointment at Wharton, Dean James was the John H. Harland Dean at Emory University’s Goizueta Business School from 2014 to 2020.

An award-winning educator, accomplished consultant and researcher, she is the first woman and first person of color to be appointed dean in Wharton’s 139-year history. As such she has paved the way for women in leadership both in education and corporate America. Dean James has been instrumental in developing groundbreaking executive education programs, including the Women’s Leadership program at the University of Virginia’s Darden School.

Known internationally, Dean James was named as one of the “Top 10 Women of Power in Education” by Black Enterprise and as one of the “Power 100” by Ebony. She has been quoted as an expert thought leader by the Wall Street Journal, MSNBC, CNN.com and numerous other media outlets. In addition to her academic responsibilities, Dean James is a board member of SurveyMonkey, a California-based market research and customer-experience company, the Graduate Management Admissions Council (GMAC) and several organizations that align with her passion for education and advancing women in business. She is also a board member of Save the Children, a nonprofit organization dedicated to improving the lives of children through better education, health care and economic opportunities.