When George Dutile, WG’17, wanted to transition from the military, he and his wife worried about taking a risk on an MBA. They went “all in” at Wharton, and the whole family benefited.

George Dutile, WG’17, came to Wharton for two main reasons. The first is familiar to most MBAs: He wanted to make a career transition. The second is less common: to strengthen his family.

That’s because the military career George transitioned from had required 10 overseas deployments, taking him away from his wife and two children, now ages 7 and 4, for long stretches of time.

“For eight years, the longest I was home continuously was three weeks,” he said. “I was gone for five or six months at a time. I missed stages of their lives.”

George, who now works in private wealth management at Goldman Sachs in New York City, had a background in Special Operations Community — he’s a brave guy. Still, he described applying to Wharton as “100 percent the scariest thing I ever did” because of financial and opportunity costs and how it would impact his young family. But when he and his wife decided to make the commitment to MBA, they went all in together, selling their home in Virginia Beach and bringing their children to Philadelphia.

“And now that I’m on this side of the fence?” George said. “It’s 100 percent worth the gamble. It’s one of the best decisions that I ever made.”

How He Got Here

George always knew he wanted to join the military, so he thought he’d have a smooth path when he graduated high school. It didn’t turn out that way. A California native, he was accepted to Stanford but picked San Diego State because he wanted a college life before the military. He was thrilled to be accepted onto a competitive Marine Corps Special Operations unit.

A week after he got his notification, 9/11 happened.

He got pulled out of school, trained, then deployed to the initial Iraq war cut short by a medivac. A few months later he returned to Iraq and served for another 6 months before the next medivac.

“Once home and recovered, I thought it was time to take a break and go back to school at UNLV,” he said, spending two years before he was re-activated to an Africa deployment. He took this opportunity to transfer to a field he was passionate about and served another 8 years in a separate military capacity in Virginia Beach.

By 2014, George was happily married and a father of two, but he’d watched too many friends die and saw too little of his family, which was what gave him strength. It was time for a change.

“The job was great. I accomplished a lot of professional and life goals,” George said. “However, you’re constantly gone.”

George and his wife, Jenny, sat down with a piece of cardboard and a Sharpie, and they each wrote down everything that mattered most and every goal they had. Then they ranked their priorities, and wrote down every possible job and path they could take after the military. An MBA degree for George was one of them, with a big question mark beside it.

When they crossed off everything they didn’t want, only one was left: the MBA.

After transferring to UNLV and being pulled out again during one of his overseas deployments, George had finally finished his undergrad degree online. George’s mentor told him he needed an MBA to offset his uneven record, but being admitted to a top business school wasn’t a sure thing. Applying scared him more than anything else.

“I mean, I’ve been in war. I don’t mind being shot at,” George said. “This was really scary because I was betting my kids’ futures and our family’s future. Not having a job for two years was a real concern too. My wife and I both come from less affluent families, and after the military our savings weren’t as high as we’d like them to be. But in life you have to be scared or else you’re not pushing yourself enough.”

Once George was admitted to Wharton, he began to breathe more easily. George and Jenny moved from their lakeside-home in Virginia Beach to Philadelphia’s Fitler Square. Jenny took a job planning events at PAFA (Pennsylvania Academy of the Fine Arts), and the two enrolled their kids in local elementary school and daycare.

George says that although about 20 students per year have families, there’s a lot of support in the Wharton community.

“Wharton’s ridiculously family friendly,” he said. Classmates constantly offered to babysit. When his son couldn’t go to school, his professor let George bring his son to class so he wouldn’t fall behind.

“There’s so many opportunities for you to strengthen your family bond, as well as your marriage or partnership,” he said. “It’s just so much time you can spend with your family doing really fun things, but you know you’re bettering yourself too.”

George’s wife Jenny made her own work friends as well as friends through Wharton Partners. Wharton families would get together for small group dinners and to celebrate holidays and play soccer with the kids.

George was involved on campus too, throwing himself into the Veterans Club, Wharton 22s, Finance Club, rugby, Venture Fellow (VF) and in particular, Welcome Committee and Student Life Fellows (SLFs).

“I never went to a Welcome Week because I had been in Afghanistan, so it was fun to experience that,” he said. “And I really like being a mentor as an SLF. Because I am a little bit older, I have a little bit more life experience than some.”

“There’s a lot to do, so it’s a challenge, balancing your family and wanting to be a part of Wharton and give back to the community here,” he said. “But it’s the world’s best challenge because nothing you’re balancing is negative.”

George never lost balance. “For me having the benefit of having 10 combat deployments, I already had a lot of introspection time to figure things out and see what’s important,” he said. “What I came here to learn was the academic portion. At Wharton I’ve been a sponge just trying to learn as much as possible.”

He found that his class schedule, concentrated on Mondays and Wednesdays, gave him more time with this children than he even anticipated.

“So I walk my son to school every morning,” he said. “I come to school then I pick up my daughter from daycare and walk them both home on nice days. I’ve never seen them this much or my wife. It’s been crazy.”

After a year in the program, George earned a scholarship, which eased some financial worries.

“One thing I learned at Wharton is to lever up a little bit,” he said. “Time is something you can never replace but money you can.”

During their last semester at Wharton, Jenny left her job so they could maximize family time together. “We don’t do anything crazy. We have dinner together every night,” he said. “We bathe the kids and put them to bed, and we have our time to hang out. Then wake up and repeat.”

On to the Private Sector

When George began recruiting, some of the industries he looked into would require too much time away from home, which wasn’t acceptable to him.

“The whole reason I left the military was to spend more time with my family and set my kids up for success and give them a future,” he said. “I didn’t want to trade that in for another situation that took me away. Everyone said to look into private wealth management, so we decided to take that path and move somewhere, then not move until our kids graduate high school. We want them to have stability.”

George accepted an offer from Goldman Sachs and settled with Jenny and their children in Greenwich, CT. Their gamble is paying off.

“I wanted a career transition, but I also wanted these two years to strengthen our family,” he said. “I really wanted to create this impenetrable base for our family when we have little bit more time and could put the work in, that will sustain us later.”

What Happened to George’s Hair 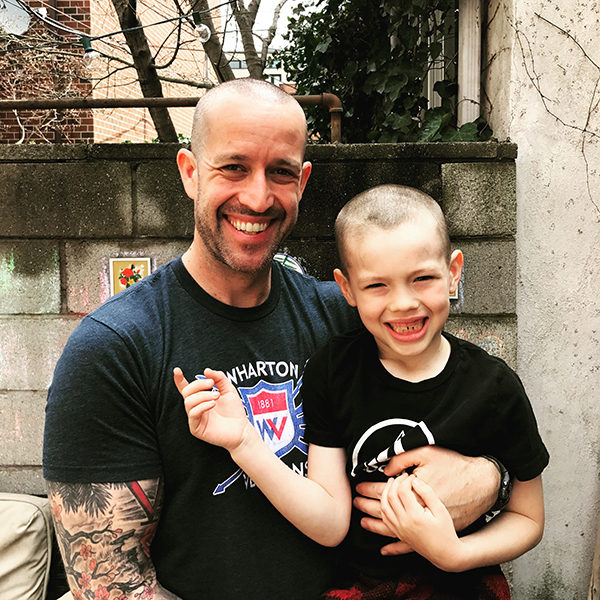 George explains a temporary change in his appearance.

I had a lot of hair, so my good friend and classmate, Justin Tuck, told me about St. Baldrick’s Foundation, a charity he’s involved with. When he asked me to join him in supporting their cause, so I decided to shave my head to raise money for for childhood cancer research.

We were walking to school and I was explaining to my son what charity was. He was like, “Why are you shaving your head?”

I said, “Well, there are kids who are sick and need treatment. Sometimes they lose their hair, and so this shows that it’s OK to lose your hair.”

My son is a little saver, so he had $87 that he’d saved across time. He wanted to give me his money.

I said, “We’re in a position in life where our actions can get more money than our bank accounts. What we do can be more impactful. It makes more sense for me to shave my head because we can raise more money than $87.”

On our walks every morning we get to have these conversations. Wharton has really big desire to give back. There’s a lot of interest in social responsibility here, and I was able to pass it on to my kids. And these moments together are ones we would never have had before.