Dean Geoffrey Garrett says electric vehicles could be the next big export industry for China and the country could be a leader in AI.

From Absolute Growth to Quality Growth

Garrett, the Reliance Professor of Management and Private Enterprise and Professor of Management, talked about the importance of the move from absolute growth to quality growth for China. “It was always the case as China became more of a middle-class country and more consumption-led, that the growth rate would slow down,” he said. “So 10 percent growth into the future was unattainable, but high-quality 5 percent growth should be sustainable for a long time in China.”

He mentioned China’s focus on the reduction of pollution as an example of that high-quality growth. “If China can reduce pollution in cities like Beijing, that will be incredibly important for the lives of Chinese citizens, but it will also position China to be world leader in the production of electric vehicles, which could be the next big export industry of China,” he said.

The notion that there should be a second reopening in China signals that the Chinese government realizes there is still a lot to be done, such as reducing the inefficiency in the state-owned sector and enhancing the competitiveness of private enterprises. “China has liberalized its investment rules, particularly in financial services, and the outbound investment will increasingly become one of the largest features of the global economy going forward,” Garrett said. “What China has done is incredible, but everyone in China realizes now that there’s another stage that needs to be reached.”

On the topic of AI, Dean Garrett explained that the worry that “the robots are going to take all the jobs” is actually quite a Western concern. “AI is an incredible opportunity for China going forward because of the quality of your technical education, science, and engineering,” he said. “It really is going to be a data-science-led world in the next five to 10 years, and China is incredibly well placed.”

He suggested that China is positioned to do even better than the U.S. in AI. “I was in a (Davos) session today when somebody said this year that investment in AI in China was 30 times as big as in the U.S. — that’s an incredible number. “I haven’t been able to verify (that number), but it tells me that China is positioned actually to lead in AI, which would be a first.”

With Alipay and WeChat pay, China’s two dominant mobile payment platforms, the Dean said one could argue that the core technology was invented in the U.S. by PayPal and other players then scaled in China. “But in AI, China could be in front of the U.S., and that would be a remarkable development,” he said. “If I were a young person in China right now I’d be saying I want to invest in technical education because that’s where China can lead and that’s where my future could be really positive.”

View the full segment with Yicai about China’s Economic Outlook and Dean Garrett’s thoughts on the future of AI in China. 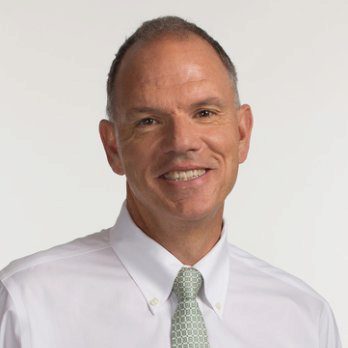 China Has a Huge Lead in the Fintech Race, But is the Gap Insurmountable?

Why the US is Losing Ground to China in Asia