When Dr. John Chou, WG’19, came to Wharton’s MBA Program for Executives, his fear of public speaking prevented him from addressing large crowds. It even made him reluctant to talk in class. However, he recently gave a toast at a reception for over 100 admitted students and regularly speaks out in class. He credits several aspects of the EMBA program for his new public speaking skills.

“I’ve never enjoyed speaking in front of large groups. I get nervous and forget what I want to say. I came to Wharton for its rigorous focus on finance, but I discovered that the program also teaches soft skills like public speaking that are just as valuable for business leaders,” said John, who overcame his fear of public speaking in four ways at Wharton.

Wharton offers several types of career and leadership coaching for EMBA students, including working with EMBA’s Senior Advisor on Group Effectiveness, Prof. Peter Kuriloff. “I had several sessions with Prof. Kuriloff to talk about my fear, why it occurs, and how I can manage it. He helped me think about my responses to public speaking and we practiced several techniques. That helped a lot!” said John.

“The environment in Wharton’s EMBA program is very warm and supportive, which makes the risk of trying things a lot lower. I was honest with my classmates early on about my fear of public speaking and how that impacted my ability to contribute in class. They encouraged me to speak up and share my thoughts. They would say, ‘John – you know about this and should speak to this point.’ That helped alleviate some of the fear,” he said.

John also joined the student-organized Toastmasters Club to get even more practice with public speaking. At each meeting during school weekends, students give both prepared and impromptu speeches and receive feedback from their peers. “It was helpful to work on this skill in such a safe environment with classmates, who share an interest in improving their public speaking ability.”

In addition, first-year EMBA students take a required core class on Management Communication, where they learn the essentials of persuasion, gain confidence in public speaking, and receive feedback. “In the first part of the course, we learned how to structure arguments and about different aspects of public speaking. The second part of the class focused on more specific types of persuasive speaking like how to deliver a speech on an innovative idea for a startup. We also practiced speaking with a teleprompter, which is a unique skill. Everyone is taking the same risks with public speaking together, so that made it easier,” he said.

One of the biggest lessons about public speaking, noted John, is that leaders need to deliver certain messages regardless of how they are feeling. “During one of my practice speeches, I received feedback that my facial expressions and body language didn’t match my message. My speech was intended to rally the troops to fight something, but in my mind, I was second guessing what I was saying and felt tired. That came across to the audience. Through feedback in that class, I learned to not let my emotions take over whether I’m talking in class or at work.”

John adds, “The skill of public speaking becomes more important as you ascend the leadership ladder because it impacts how you are perceived by others and how you relate to people. This skill can make or break you as a leader so it’s a very valuable part of the curriculum at Wharton.” 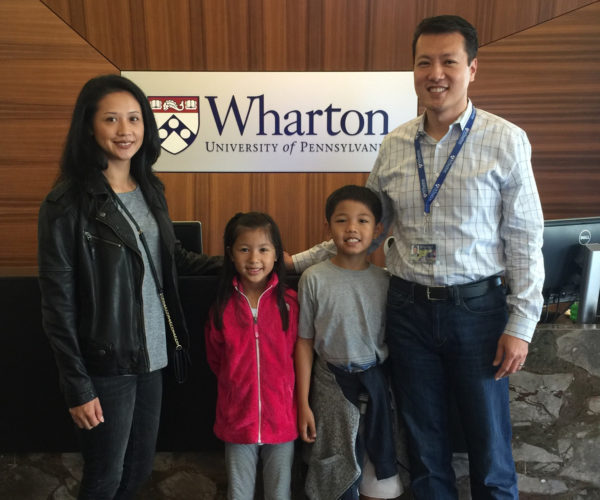 Prior Education
Johns Hopkins University,BA in Biology; MD in Medicine