While there are many student consulting groups and various feminist organizations on Penn’s campus, Becca Bean, C’21, W’21, and Sarina Divan, W’21, saw a gap in the intersection between the two and started a club to fill it.

The Gender Balance Consulting (GBC) Club founded by Becca Bean, C’21, W’21, and Sarina Divan, W’21, is the first student-run gender consultancy in the country. The Wharton sophomores have high ambitions for the organization.

Their inspiration  dates back to before Becca and Sarina started their undergraduate careers at Wharton. Although they attended different high schools, they first met in their senior year of high school as Teen Advisors for the UN Foundation Initiative “Girl Up,” a global movement of empowered young women leaders who defend gender equality. As Teen Advisors, Becca and Sarina were central to Girl Up decision-making including advocacy, fundraising, and communications strategy.

Fast forward one year, and they both ended up at Wharton. Becca was involved in Global Research Consulting as a Project Leader and in Own It (a women’s leadership club). Sarina was involved with the Penn Wharton Public Policy Initiative. When the two of them met up, they both wanted to get involved with something that would allow them to have greater impact.

Said Becca, “Fusing this pre-professional idea with an idea focused on gender equality and women’s leadership is really how this club came about.”

The club is founded on the duo’s strong belief in the cause of gender equality. An important point that Sarina highlighted is the fact that “research consistently shows that gender balance and equality in the workplace lead to financial success for companies. It’s not just for optics; it genuinely leads to higher productivity, better decision making, and greater innovation.”

Given their commitment to this belief, Becca and Sarina faced a dilemma when thinking about how to execute their idea. At first, they considered pitching their proposal to form a separate branch within an already-existing club, but they felt that by doing so, they would reduce the importance of the issue of gender balance to a secondary concern; establishing GBC as a stand-alone organization emphasizes the importance of the club’s mission and goals.

The Wharton sophomores set themselves a high bar with what they hope to achieve. After all, they founded the club with the explicit mission to “encourage individuals all over the world to recognize gender balance as a priority.”

Real Impact for the Penn Community and Beyond

In addition to their focus on gender balance, Becca and Sarina are differentiating their club from other student-run consulting groups by working not only with external clients, but also within Penn itself – after all, gender balance also remains a pressing issue amongst student clubs and the Penn community at large.

They use a wide variety of diagnostic methods and tools to assess an organization’s gender balance, which they learned about from Lauder alumna Jennifer Shannon Flock, WG’18, G’18. When they reached out to Jennifer, who at the time was the COO of gender consultancy 20-first, Becca and Sarina learned about quantitative and qualitative methods to measure gender balance. They have already had a student group reach out to them for their consulting services, and will soon begin working with local coffee chain Saxbys on assessing their gender balance, but their work is not limited to advising and consulting – they are also engaging the Penn community in learning more about the topic of gender balance.

Additionally, they want to expose the undergraduate community to prominent figures in the field of gender balance. The club recently hosted Stephenie Foster, L’86, in a discussion on how and why business can focus on gender equality. Stephenie is a partner at Smash Strategies, a consulting firm that works with organizations to leverage their commitment to women and girls.

Wharton’s Role and What the Future Holds

Becca and Sarina have gotten off to a strong start, and they credit part of their successes to the resources available at Wharton.

Through her connection with the Wharton Social Impact Initiative (WSII), Becca ran the idea for GBC past an employee in the initiative, and also got in touch with an expert in gender lens investing that she met on a WSII social impact business trek last year.

Said Sarina, “We’re uniquely positioned at Penn to examine this issue and see how we can change it, being in a major city with Wharton as our business school and a female president of our school too.”

In their first General Body Meeting (GBM) of the semester, Becca and Sarina demonstrated gender jaws, a diagnostic method for accessing gender balance.

The way they presented this at their GBM was by applying this concept to Wharton clubs. In advance of the meeting, the sophomores reached out to all Wharton undergraduate clubs asking for a breakdown of the clubs’ memberships by gender at the general member and board levels. Those attending the meeting then used that data to form gender jaws graphs, which not only gave them an insight into the state of gender balance across Wharton student groups, but also showed them how easy it can be to measure gender balance within any organization. 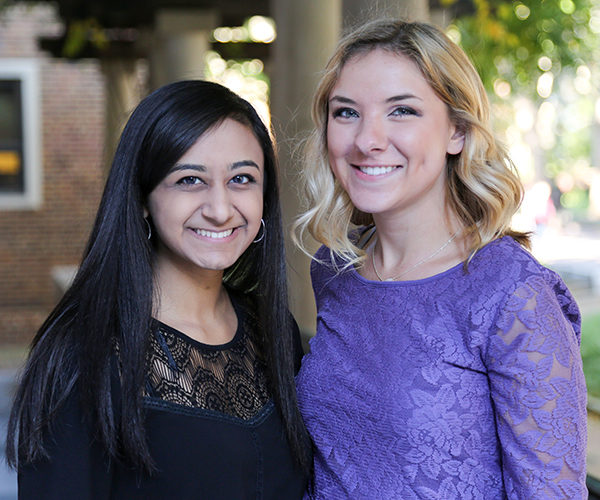