Why MBAs Traveled to South Korea for a Global Immersion Program

Image: MBAs at the Gyeongbokgung Palace in Seoul, South Korea

The program’s first study tour to Seoul and Busan delved into holistic, globalizing advancements in South Korea — past, present, and future.

Study tours through India, China, and the Middle East have been long-standing destinations of Wharton’s Global Immersion Program (GIP), but this spring break, 36 MBAs chose to spend a week in South Korea instead.

For Chris Lyle, WG’19, it was his first proper trip to Asia. “Prior to attending Wharton, I really wanted all my traveling experiences to be places that I otherwise wouldn’t go.” South Korea was one of them. “When you think of travel, a lot of times you think it’s for leisure. To actually have an opportunity to extract some educational value that is practical to your career or to your cultural understanding is hugely important.”

Until 2018, South Korea had been a tail-end stop for GIP tours in East Asia, but was never a standalone program. This year’s Korea GIP follows closely behind the Lauder Institute’s recent inaugural Korean Language program — a sign of burgeoning interest in the country’s business potential.

“We’re always trying to respond to what’s happening in the market,” said GIP staff director Dr. Amy Miller, who co-lead the MBAs through Seoul and Busan. “What are students interested in learning about, and where do we think we can deliver a top-notch, excellent program? A lot of that has to do with having really strong contacts, great alumni base, and the infrastructure to support the program that we’re running.”

The theme “past, present, and future” framed the GIP’s corporate survey of the Korean market: In Busan, students were driven up the coast to visit Hyundai Motors, a part of the country’s manufacturing legacy. In Seoul, they toured Samsung Electronics, a leader among consumer products driving the current economy. They went behind-the-scenes of “Hallyu” (the Korean Wave) to examine how it will continue to export Korean culture through industries like K-pop and K-beauty in the future.

The GIP is unique among immersive programs for being regionally specific, as opposed to topically specific, meaning MBAs get an comprehensive look at local issues. Student input is also formative to the planning process. Some on the Korea GIP wanted to explore tech innovation, while others were looking for insight into one of the fastest-growing developing countries in the world.

“In the 70s, South Korea’s economy was very similar to Ghana. In an unprecedented time, no other country has grown at such a rate,” Miller said. “A number of our students actually come from developing countries on the precipice of these rapid developments. They’re like, ‘We want to see how they’ve done it and see how we can replicate those lessons at home.’”

GIP student coordinator and president of Wharton’s Korea Club, Andrew Park, WG’19, believes Korea has a little bit to offer to everyone across facets, whether it be dynamism, political evolution, or the intense “work hard, play hard” culture.

“As a business person, it’s a very interesting place to be,” said Andrew, who aspires to work in Korean travel and hospitality. “We’re without natural resources, we don’t have a big population, yet some exciting things are happening.”

Between corporate visits, students made their own kimchi to bring home, stopped by the Demilitarized Zone and Gyeongbokgung Palace, experienced nightlife, and connected over dinner with members of the Wharton Alumni South Korea Club.

On the same day North Korea announced plans to denuclearize, MBAs sat down for a Q&A with Dr. Chung-In Moon, special advisor in Foreign Affairs and National Security for South Korean President Moon Jae-In. Dr. Moon has been intimately involved in the conversation around Korean diplomacy. 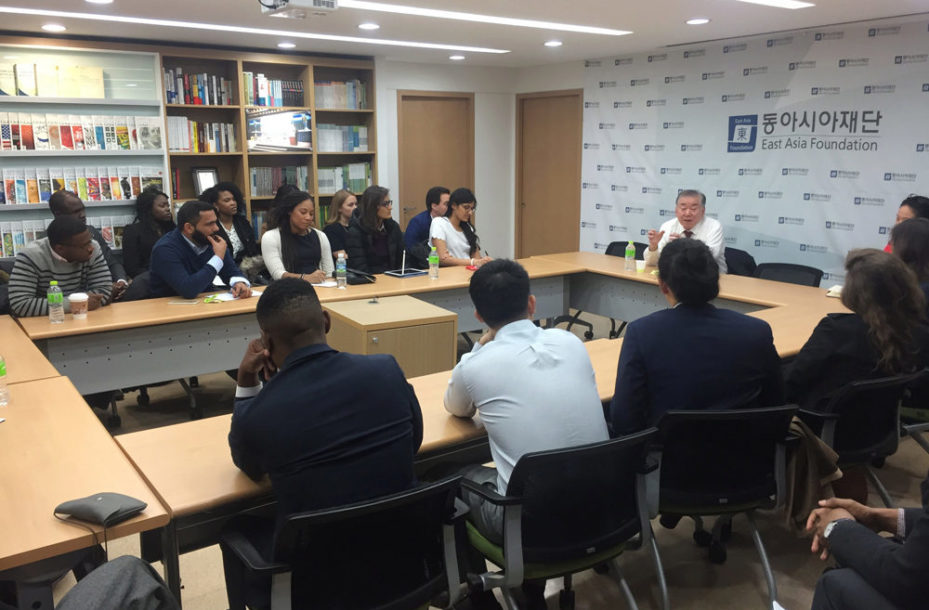 The Q&A was a highlight for Andrew, a Seoul-native. “The way Dr. Moon dealt with the questions from the students was so in-depth and refreshing in terms of perspective. It made me realize that interactions with locals who are very well-versed in context and have stories to tell are more interesting than you think. When there’s live interaction, those stories are registered.”

On his major takeaways, Chris said: “As you think about global business, how does the unification of Korea have an impact on that? It doubles your labor force and has macro implications.” His post-trip capstone presentation reflected on how millennial influence is propelling global business in South Korea, particularly through fashion.

As the recipient of the Global Immersion Program Ambassador Fellowship, getting financial aid helped Chris take full advantage of his time abroad. “As I get ready to head back to campus in the fall, informing some of the incoming first years and other classmates that the opportunity exists is extremely important to me, because it’s one of those things that’s not highly advertised.”

Next year, the South Korea GIP is slated to return with an expanded itinerary. Since spring, Andrew has been weighing ideas to improve the next tour, like adding Jeju Island and going deeper into the stories behind the places they visit.

“I think GIP is a great example of what you can do only at Wharton, because you get inside access to great companies and cultural locations,” Andrew said. “What was really rewarding for me was making really great friends with people that I might not have ever been friends with. People usually flock in groups that reflect ethnicity or cultural background, but I think this experience transcends those.”

Major/Program
Management and Marketing, with a focus on disruptive tech

Favorite place he visited in Korea:
Samsung, because “being able to put my hands on tech that some of the leading companies in the industry are developing was hugely impactful for me. It paints a better picture than reading an article, where there’s just a headline.”

Why he came to Wharton:
“I see that the world is becoming one big market.” Wharton, a business school where he can interact with people from all around the world, is a springboard for work opportunities overseas.